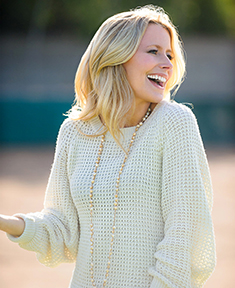 Tina hails from the gritty, suburban landscape of Boonton, New Jersey – a town best known as the punch line of every joke in the Sopranos. When she wasn’t playing touch football in the street with her brother, Nick, or listening to Beatles songs backwards to find out if Paul really was dead, she was performing in any way she could. From cheerleading and band competitions, to ballet recitals and school plays, Tina was always rehearsing for something.

She attended Rutgers University and graduated with a BA in Communications. Having absolutely no idea what to do with that degree, Tina found herself, days after graduation, pushing the mail cart at the prestigious William Morris Agency as an agent trainee. After three years at WME, she was recruited by ICM (International Creative Management) to help create and build their scale voiceover department. While being an agent was an incredibly rewarding experience, Tina knew she had yet to satisfy the acting bug that was still buzzing inside of her. So, having gained perspective of the business side of acting (oh, alright... despite having gained this perspective), she decided to trade in her (next to the) corner office overlooking Central Park, for a spot on a dirty classroom floor back at Rutgers University in order to pursue

her Master’s Degree in Acting from William Esper’s, Mason Gross School of the Arts. Armed with a shiny diploma and the number to a killer Beverly Hills hair salon, Tina moved out to Los Angeles to begin her career in 1999 and never looked back. Since then, she has worked steadily in film and television. Credits include: Jane The Virgin, Castle, Parks and Recreation, Two and a Half Men, Numb3rs, Boston Legal, CSI, Cold Case and many more. She can also be heard every Monday night as the voice of the HGTV hit series, Love It or List It, as well as countless TV and radio commercials and promos. In 2018, she joined forces with Sound & Fury Media, Inc. where she is currently the Head of VO Casting. She is also the proud mom to a hilarious and uber-talented teenage daughter named Callie Okun, and therefore speaks fluent sarcasm.

Tina Morasco brings a unique blend of industry and artistry to her VO coaching, having been a voiceover agent at two of NY’s premiere talent agencies (WME and ICM) as well as a successful VO artist for the past 20 years.